Thomas Paine once said, “Titles are but nicknames, and every nickname is a title.”  Whichever you choose to use—title or nickname—one thing is for certain and that is Mr. David Wilson has got himself a doozy.  David Wilson is a lawyer and a newcomer to Dawson’s Landing, a slaveholding town on the Missouri side of the Mississippi River.  Since irony is apparently lost on the good folks of Dawson’s Landing, Mr. Wilson’s first (and last) attempt at humor falls somewhat flat and results in the people thinking their newest citizen is a fool; therefore, it is only reasonable that they give him the equally fitting nickname of “Pudd’nhead”.  Fortunately, what Pudd’nhead lacks in comedy he more than makes up for with fads.  He has a penchant for palmistry and finger marks and is so enamored with the latter, he goes all around town collecting as many as he can from anyone he meets.  Little does he know how useful these marks will prove to be when a case of mistaken identity, a series of robberies, and a brutal murder will ultimately point to the fact that perhaps Pudd’nhead Wilson isn’t such a fool after all.

Pudd’nhead Wilson is part murder mystery, part social commentary, and part psychological study of nature versus nurture.  Combined, it’s a humorous and thought-provoking story of good intentions, broken promises, honor, love, and the ultimate price of sin.  Twain gives us a story of two babies—one free and one slave—who were switched at birth and grow up according to their station in life.  The slave is bound to his master while the other is bound by his uncle’s and society’s expectations.  Twain also delivers one of the most infuriating and insufferable characters ever to grace the written page (honestly, you just want to reach in and give him a good wallop).  Our young Tom, who has been given every privilege imaginable, is crass, spoiled, smug, selfish, ungrateful, untrustworthy, and cowardly.  If ever there was a character truly deserving of a comeuppance, it would be Tom.

Mark Twain was born in the slave state of Missouri and slavery was a central theme in his writings.  However, Pudd’nhead Wilson doesn’t focus so much on slavery as it does on two men and how their lives are ultimately determined by the cradle in which they sleep.  A simple switch and both lives are irrevocably changed forever.  One man is given everything only to squander it away while the other is given nothing, but makes the most of what little life has to offer.  Pudd’nhead Wilson is a commentary on grace versus greed, dignity versus disgrace, and affection versus apathy and Twain delivers it all masterfully.  But of course, Mark Twain would know a thing or two about fools.  After all, it was he who gave us the quote, “It is better to keep your mouth closed and let people think you are a fool than to open it and remove all doubt.”  Oh, if only Pudd’nhead had known. 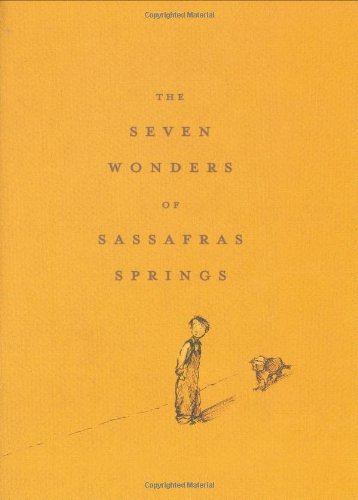 The Seven Wonders of Sassafras Springs

“Sometimes extraordinary things begin in ordinary places” and, according to 11-year old Eben McAllister, there is absolutely, positively NO place more ordinary than Sassafras Springs.  On this particularly hot July day, while Eben is buried in his book about the Seven Wonders of the World, his father offers him a deal:  find seven Wonders in seven days in Sassafras Springs and he will buy Eben a ticket to Colorado.  SEVEN?  Eben can’t imagine even finding ONE Wonder let alone seven.  But with a ticket out of town on the line, Eben is ready, willing, and able to look just about anywhere and everywhere to find them.

With folksy, down-home dialogue and quirky, lovable characters, Birney makes even an ordinary saw, a worn-down table, and a waterlogged bookcase true Wonders.  Her story is like a tall glass of cold lemonade and the best spot on the front porch:  refreshing, pleasing, and thoroughly enjoyable.  I found it bittersweet when I came to the last page of this book.  Having to say goodbye to Eben, his trusty dog, Sal, and the folks of Sassafras Springs was akin to leaving home for the first time.  But as Eben reminds us, when Columbus and Balboa set off to discover faraway lands, even they knew that it wasn’t “goodbye”, just “see you soon”.

I hope this little gem encourages readers to discover or rediscover the treasure that lies right outside their own doorstep, for sometimes the biggest Wonders are right in our own backyard.