The tramp steamer Drake—loaded with coffee, rice, tea, oil seeds, and jute—was pushing its way from India and heading to New York City.  Aboard was young Alexander (Alec) Ramsay, who had just spent two months in India with his uncle.  Also on board was a wild black stallion picked up in an Arabian port.  Alec knew enough about horses to be intrigued by the magnificent beast, but also wary.  This was not an animal to be underestimated.  But one night, the Drake encountered a fierce storm which would ultimately spare only two passengers:  Alec and the stallion whom he called “the Black”.  Can these two possibly form an alliance in order to survive their harsh and uninhabited island home?

The Black Stallion, published in 1941, is the first of twenty books in The Black Stallion series written by Walter Farley.  The twenty-first book, The Young Black Stallion, was co-authored with Farley’s son, Steven, and published shortly after the author’s death.  At the time of the book’s publication, the news was dominated by the war in Europe and so this book not only served as a respite from the ensuing turmoil, but was also a reminder of the good still inherent in humans.  The Black Stallion is a wonderful story about the importance of trust, loyalty, and devotion to each other during the most trying of circumstances.  Today’s young readers may find this story’s text to be a bit hokey given its multiple uses of the words “gee” and “swell”, but this book is an excellent example of how far someone can go when they not only have faith in themselves, but they have the unified support of those closest to them.  Alec is surrounded by loving and encouraging adults who do not treat him as an idealistic child, but rather as a competent and trustworthy peer.  Modern juvenile fiction often pits the young protagonist against skeptical parents, jealous schoolmates, or crotchety neighbors—anything that presents an obstacle that our young hero or heroine must overcome.  The Black Stallion instead focuses on positive relationships and the rewards that come with perseverance and good old-fashioned hard work.

The unlikely relationship between Alec and the Black garnered much awe and attention from all who witnessed it.  One such observation came from a ship’s captain and his first-mate, Pat.  After the captain marveled at how gentle the Black was in the presence of Alec, Pat replied, “Yes, sir,” he said, “one of the strangest things I’ve ever seen.  I wonder where it’ll take them?”  Lucky for us, it took them on many, many unforgettable adventures that would span twenty-one books and an incredible forty-eight years.  Enjoy. 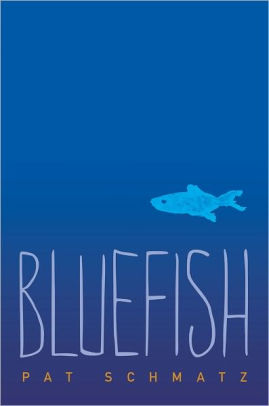 “One fish, two fish, red fish, blue fish.”  Might as well be, “One fish, two fish, Travis is a stupid fish.”  At least that’s what they all say…well, what one person says, but he is a VERY influential person.  Travis Roberts is the new kid in the eighth grade.  The only thing keeping him in school was his dog, Rosco, and now that he’s gone, what’s the point?  He’ll always be stupid.  He’ll always be a bluefish.  But then Travis meets Vida (her public calls her “Velveeta”) and Bradley Whistler (who is THE smartest kid EVER) and Mr. McQueen, his reading teacher.  Up until this point, everything that Travis cared about was gone.  Maybe now he has a reason to begin caring again…even if he is just a bluefish.

Pat Schmatz serves up an awkwardly accurate and often humorous portrayal of adolescence through three flawed and endearing misfits—all longing to fit in and wanting to be a part of something bigger than themselves.  Our three protagonists are no longer a child and not quite an adult, and Bluefish shows us the mask each wears to cover up their insecurities and shortcomings.  From the brainiac to the class clown to the strong, silent type, Schmatz successfully encapsulates the complicated world of teenagers and the tangled and convoluted roadmap that directs their everyday lives and dictates their emotions.

Bluefish is more than a story of friendship and middle school survival, it’s a story of how one person has the power to change the very course of our life:  a kid who finds and hands back your stolen shoe; a girl who invites you to sit with her at lunch; or a teacher who volunteers his or her time to tutor you before school.  Thank you, Ms. Schmatz, for reminding us of the importance of not giving up on our friends, and—more importantly—not giving up on ourselves.  You have shown us that being a bluefish really isn’t so bad and can actually be a rather remarkable thing after all.

Kate McCray died ten months ago, but her absence remains as fresh and painful for her husband, Ian, and their ten-year-old daughter, Mattie as the day she slipped away from them.  Upon her death, Kate leaves a letter for Ian expressing her dying wish: “Be happy.  Learn to laugh again.  To joke.  To wrestle together like you once did.  Learn to be free again.”  To achieve these things, Kate wants Ian to take Mattie on the trip the two of them intended to make to celebrate their fifteenth anniversary.  A trip across Asia that would allow Mattie to experience what her parents once shared in so many diverse and wondrous countries: Japan, Nepal, Thailand, India, Hong Kong, and Vietnam.  But can Ian do it?  Can he revisit a past full of memories of his wife in order to forge a future without her?

John Shors delivers a touching and bittersweet story of a husband and daughter embarking on a journey of self-discovery, healing, and enlightenment.  Although deceased, Kate remains a prominent presence and central figure throughout the story.  She has left handwritten notes inside twelve film canisters—six each for Ian and Mattie—which are to be opened upon the pair’s arrival in each country.  Kate’s words of love and encouragement are a constant reminder of the tender and altruistic person so tragically torn from our main characters.  Her careful planning of this trip, despite her weakened state, and her desire for her family to move on without her is heartbreaking in its selflessness and hopeful in its intent.  What’s most striking is Kate’s constant encouragement for her loved ones to make a positive difference in the world.  In one of her letters to Mattie, Kate writes of Buddha, “Do you know what Buddha says about happiness?  He said, ‘Thousands of candles can be lighted from a single candle, and the life of the candle will not be shortened.  Happiness never decreases by being shared.’”  With each canister that is opened and with each note that is read, we can easily understand how indomitable a task it is for Ian and Mattie to emotionally recover from their loss.

The Wishing Trees is a beautifully written love letter to anyone who has ever lost a love and hungers for a sign—any sign—that they’re still with us.  That they still see us.  That they still remember us.   It’s also a story about the power of kindness and the extraordinary healing powers in doing good.  Numerous books have been written on research connecting helping others to health benefits or, simply stated, doing good is good for you.  Perhaps Kate knew this all the time or perhaps she remembered an Indian saying during her travels, “When you were born, you cried and the world rejoiced.  Live your life so that when you die, the world cries and you rejoice.”