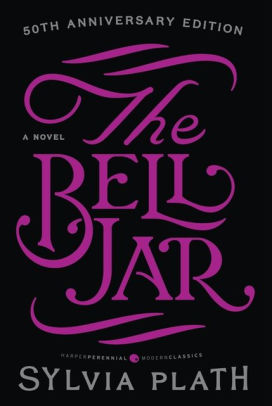 Esther Greenwood knew something was wrong with her that summer, and it wasn’t just the electrocution of the Rosenbergs or all the non-stop talk surrounding it.  She was supposed to be having the time of her life.  She was in New York and living the high life—a far cry from her 19 years living in a small New England town.  It was the summer of 1953 and what Esther knew for certain was that one of her troubles was Doreen.

Published in 1963, The Bell Jar was poet Sylvia Plath’s first and only novel.  Weeks after her book’s publication, Plath committed suicide at the age of 30.  Given that Plath’s personal struggles with money and depression parallels those of her main character, it is understandable why many view The Bell Jar as being semi-autobiographical.  Although this book deals with grave and bleak issues, Plath’s poetic prowess shines through giving readers a story that is poignant yet subtly lighthearted.  Although Plath’s future as a novelist would never be fully realized, she managed to give us a heroine that epitomized the women of her day.  The feminist movement saw its beginnings in 1963 and Plath put Esther right on the front lines—questioning societal views on conformity, conservatism, femininity, marriage, and family.

Much has changed since the release of The Bell Jar, but the increasing number of individuals diagnosed with depression or anxiety, as well as the rise in suicides, continue to make this novel timely and relevant.  Throughout the story, told in first-person narrative, Esther often describes herself as existing inside a bell jar: continually experiencing isolation and detachment from the outside world, always feeling that she is on display and expected to be more than she is or ever will be, and constantly struggling to be “perfect”.  When Esther learned that the famous novelist, Philomena Guinea, would be willing to pay for her treatment and education, Esther could conjure up neither gratitude nor any amount of relief: “I knew I should be grateful to Mrs. Guinea, only I couldn’t feel a thing.  If Mrs. Guinea had given me a ticket to Europe, or a round-the-world cruise, it wouldn’t have made one scrap of difference to me, because wherever I sat—on the deck of a ship or at a street café in Paris or Bangkok—I would be sitting under the same bell jar, stewing in my own sour air.”

Esther Greenwood is a young woman trapped in a life that she is tired of living, yet afraid of leaving.  During her story, I often found myself silently cheering those times when the seal of her bell jar was lifted just enough to allow a bit a fresh air to seep through.  It was during these times that I hoped Esther, and others who suffer under their own bell jar, would be able to momentarily experience a feeling of joy, worth, and hope.