Sunflower was lonely.  Her father was a revered sculptor in the city, but he—like so many others—had been sent to work at the Cadre School and now Sunflower has very little to do all day.  To pass the time, she goes down to the river and looks to the other side at the village called Damaidi.  In Damaidi, there is life, there is activity, and most of all, there are children.  She dreams of what it might be like to go over there and play and explore.  Then one day, Sunflower’s dad tragically drowns in the river and she is accepted into the home of Damaidi’s poorest family.  There she meets Baba, Mama, grandmother Nainai, and Bronze, their mute son.  Suddenly, Sunflower is a daughter, a granddaughter, and a sister and life amongst these poor people was about to make her richer than she could ever imagine.

Translated from Mandarin by Helen Wang, Bronze and Sunflower is a masterpiece in storytelling.  It tells the story of a family and a village caught up in China’s Cultural Revolution during the late 1960s and early 1970s.  Wenxuan doesn’t make this period in history the center of his story, but instead chooses to keep it as a backdrop.  He instead focuses on the unique and touching bond between Bronze and Sunflower and the family’s struggle to survive floods, locusts, famine, and dishonor.  It’s a tale replete with villains and heroes, sadness and joy, and despair and hope.  Wenxuan effortlessly weaves a tale showing us that life isn’t fair, that justice is often elusive, and that those in power—for better or worse—wield a mighty influence.  But he also shows us the importance of family, the power of redemption, and the value of integrity.  It’s a story absolutely brimming with moral lessons and human values and should be devoured by readers of all ages.

The only fault I had with this book is its ending.  It’s vague (I re-read it several times to make sure I didn’t miss any subtle clue or hidden meaning) and puts the burden on the reader to determine what happened.  I’m not a fan of this kind of ambiguous ending, but the overall story isn’t dependent upon it and so its vagueness shouldn’t serve as a detraction from an otherwise engaging and captivating tale that was an absolute joy to read and experience.

Without giving away any spoilers, the saddest part of the story—for me—was the eventuality of Bronze and Sunflower growing up…as children tend to do.  The head of the village of Damaidi stated as much when he met with Baba and Mama and said, “Time’s moving on.”  Simple words that remind us how fleeting and fragile time is and that everything should be cherished and savored for nothing is certain or guaranteed.  With the sudden loss of her father, Sunflower understood the unpredictability of life and the value that came with belonging.  Despite her poverty, Sunflower considered herself wealthy beyond measure because she was part of a family and that family loved her very much.  Actor, author, and activist Michael J. Fox once said, “Family is not an important thing. It’s everything.”  In that respect, Sunflower had everything and perhaps that made her the richest person in all of Damaidi. 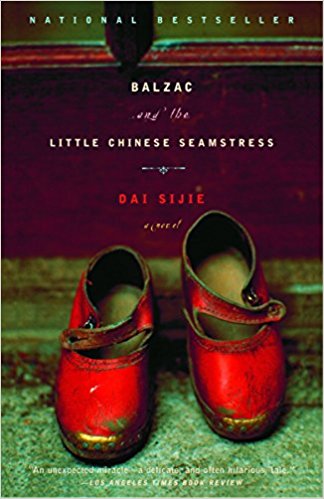 Balzac and the Little Chinese Seamstress

It was in early 1971 when two “city youths”—ages 17 and 18—were banished to the mountain known as the Phoenix of the Sky.  Boyhood friends, they were to be re-educated as part of Chairman Mao’s Cultural Revolution in China.  If they were fortunate, they would be reunited with their families after two years.  But they were not the offspring of average parents.  Instead, their parents—professional, respected, educated—were classed as enemies of the people, and their chances of release currently stood at three in a thousand.  So, the two spent their days laboring in the paddy fields, working in the mines, or carrying human and animal waste on their backs.  But one fateful day, their village headman sent them to the district of Yong Jing.  That journey would culminate with the princess of Phoenix Mountain, a miller, and an author named Honoré de Balzac.

Dai Sijie himself was re-educated and spent between 1971 to 1974 in the mountains of Sichuan Province.  His experiences undoubtedly gave this novel its authenticity, depth, and richness.  I knew very little of Mao Zedong’s 10-year movement to preserve Chinese Communism through the cultural eradication of capitalism and tradition.  Needless to say, the results were disastrous: economically, politically, and societally.  Sijie gives us a glimpse of the isolation, fear, and hysteria suffered by those who were sent away through the eyes of our 17-year old narrator (unnamed) and his 18-year friend, Luo.  When the two come across a hidden collection of translated Western classics, their worlds expand as they are introduced to the foreign feelings of lust, jealousy, revenge, and honor.  Matters are further complicated when they share these novels with the local tailor’s daughter, the Little Seamstress.

I truly enjoyed this book and found it as light and airy as a basting stitch.  It read like a well-crafted fable and the scenes were sewn together seamlessly.  It was a delightful read that reinforces the idea that the written word is often just as powerful suppressed as it is unleashed.  Albert Einstein said, “A little knowledge is a dangerous thing.  So is a lot.”  Balzac and the Little Chinese Seamstress reminds us that once a book is opened, so is the mind and when the mind is opened, the heart takes flight.  Perhaps for this reason alone, there are still those in the world who wish books to remain closed.