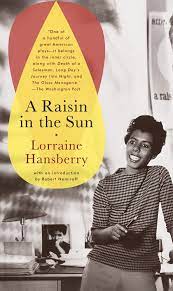 A Raisin in the Sun

In his poem “Harlem”, Langston Hughes wrote: What happens to a dream deferred? / Does it dry up / like a raisin in the sun?

As far as dreams go, the Younger family has plenty: Walter Lee wants to leave his life as a chauffeur and become a businessman; his sister, Beneatha, has aspirations of becoming a doctor; Ruth, his wife, wants to escape their roach-infested apartment and give her son a bed of his own; and Mama dreams of having a bit of ground—just enough to plant some flowers. But dreams are for other people until Mama receives an insurance check in the mail. A check that might finally be the answer to everything the Younger family ever dared to dream.

This review is based on the play with a forward written by Robert Nemiroff. This edition is the most complete ever published—restoring two scenes that were before unknown to the public. I can’t imagine anything being removed from this classic work. Each scene is a masterpiece in storytelling—carefully developing each character to expose their vulnerabilities and insecurities and examining their struggle to break free from ties that bind them economically, socially, and culturally.

Hansberry’s opening words allow us to feel the weight and heaviness that this family shoulders. They epitomize the words “poor, but proud” and it’s clear that every-day life has taken a toll on them. Hansberry even makes the furniture tired as it too seems to realize the futility of hope: The Younger living room would be a comfortable and well-ordered room if it were not for a number of indestructible contradictions to this state of being. Its furnishings are typical and undistinguished and their primary feature now is that they have clearly had to accommodate the living of too many people for too many years—and they are tired. Still, we can see that at some time, a time probably no longer remembered by the family (except perhaps for Mama), the furnishings of this room were actually selected with care and love and even hope—and brought to this apartment and arranged with taste and pride.

A Raisin in the Sun is an homage to the African-American family struggling for something better and wanting nothing more than to be treated with respect and dignity. It tackles the women’s movement and civil rights head-on through a pair of siblings who are naïve, headstrong, likeable, and well-meaning: one trying to find her place in the world and the other attempting to find his place within the family. Although this play was first produced in 1959, it is still relevant today as millions of Americans live at or below the federal poverty line and minorities continue to struggle with social and economic inequities.

Throughout the play, Hansberry has Mama nurturing a small plant that she places outside the sole window of the family’s apartment. Like her own family, the plant struggles to thrive despite the constant care given it. The plant is dear to Mama as it represents the closest thing to a garden that she would likely ever have. Unlike her children, she doesn’t need a business or a career or a house to make her happy. All she wants is a small patch of dirt so that she could watch something grow. It seems that Minne Aumonier, an 18th century poet, had the same idea in mind when she wrote, “When the world wearies and society fails to satisfy, there is always the garden.” Like we always suspected, Mama really does know best.