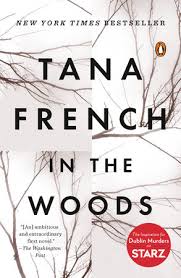 On August 14, 1984, Jaime Rowan, Adam Ryan, and Peter Savage—all twelve years old—were playing in the surrounding woods of their small Dublin neighborhood of Knocknaree when the unthinkable happened.  Jaime and Peter disappeared and Adam was found in blood-soaked sneakers clinging to a tree with no memory of the event.  Flash forward twenty years and Adam Ryan, now Detective Rob Ryan, is investigating the murder of twelve-year-old Katy Devlin in Knocknaree.  Ryan and his partner, Cassie Maddox, diligently work the case to find Katy’s killer while Ryan grapples with lost memories that may link the two cases together.  But Knocknaree is a small place.  What are the chances that two different child murderers live in the same village?

In the Woods is French’s debut novel and she handily presents an interesting and compelling police procedural.  Clocking in at 429 pages, she manages to hold our interest throughout her novel while creating a slow and steady momentum as our main characters flesh out four different threads of theories and begin peeling back multiple layers on two seemingly-connected murder cases.  Her characters are multi-dimensional and French gives us time to become familiar with them; however, the portrayals are a bit biased since we are seeing everything through Ryan’s eyes, our story’s narrator.  By his own admission, he lies and so we are already aware that throughout the case, we’re going to run into credibility problems.  (Personally, I don’t like unreliable or untrustworthy narrators, but I digress.)  The thing which pleasantly surprised me was the relationship between Ryan and Maddox.  French chose a professional relationship for these two versus the obligatory romantic/sexual conflict that readers often get when presented with a male/female partner pairing.  We see the ease they have around one another, as well as the mutual respect they share.  This platonic relationship allows the reader to concentrate on the case rather than muddy the waters with “will they/won’t they” expectations.

Despite these positives, I found this book fell short on multiple levels.  In the Woods starts off riveting and suspenseful and then—through a series of professional negligence (some folks should have lost their jobs), self-destructive decisions, and just plain sloppiness (or laziness) on the author’s part—the story begins to unravel and disintegrate right before our eyes.  Ryan is not a very likeable guy and he knows this: “I am intensely aware, by the way, that this story does not show me in a particularly flattering light.”  More often than not, he comes off as whiny and immature and his love for the bottle (which leads to more hangovers that I could count) makes me wonder how he manages to stay gainfully employed let alone be put in charge of a murder investigation.  Despite his horrifying backstory (which should have earned him at least a few pity points), it was simply impossible for me to connect with Ryan and feel any kind of sympathy for him.  Conversely, Cassie Maddox is bright, intuitive, hardworking, and a much more likeable character, which is probably why Tana French gave her the starring role in her novel’s sequel The Likeness (book two of six in the Dublin Murder Squad series).  Positives and negatives aside, the biggest problem I had with this book is the giant red herring that French made the cornerstone of her story.  I won’t divulge any spoilers, but I will say that by the end of the book, I was left feeling irritated, unsatisfied, and frankly duped.  I did stop myself from throwing the book against the wall so I guess this can be added to the positive column.

In the Woods won several awards and inspired an eight-episode series for the BBC and Starz.  Obviously, a lot of people thought that this novel and its sequel were the greatest thing since the melon baller.  However, between an annoying main character and a plot line that utterly evaporated, I hope to find satisfaction in French’s sequel.  Until then, any closure that I thought I would find in this book will remain elusive for I believe that it is still probably hiding somewhere.  Somewhere in the woods.