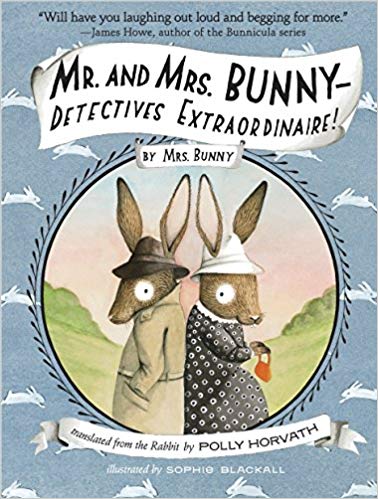 The summer solstice has arrived and the residents of Hornby Island are preparing for the festival of Luminara.  While Madeline’s parents are busy making luminaries, she is getting ready for her school’s awards ceremony where Prince Charles himself will be handing out the awards (Madeline is getting three!).  All is pretty much as it should be until Madeline returns home that night to find a mysterious note on her door stating that her parents have been taken in for questioning.  It was signed by “The Enemy” and even included a “mwa-haha”, which is NEVER a good sign.  With her decoder uncle in a sudden and rather inconvenient coma, Madeline is alone and truly in over her head.  She seeks help from Mr. and Mrs. Bunny—Detectives Extraordinaire and although these two don’t seem to know what they’re doing, they DO have rather smart-looking fedoras and that has to count for something.  So, with Mr. and Mrs. Bunny on the case, this mystery is officially afoot!

Although Polly Horvath merely translated this story from Mrs. Bunny’s personal account, she still delivers a funny, quirky, and lighthearted romp that will delight and entertain young readers who enjoy a good mystery.  Filled with fiendish foxes, garlic-bread-eating marmots, exploding chapeaus, and high-speed chases, Mr. and Mrs. Bunny—Detectives Extraordinaire is an action-packed thrill ride where faith is blind, reason is deaf, and hope springs eternal.

Despite its whimsy and charm, Horvath does give readers a few poignant lessons that hopefully won’t get lost amongst all the fur, fluff, and fun.  Through Madeline, we see a girl caught between two worlds: the happy hippies of Hornby and the more mainstream children at her school on Vancouver Island.  Her classmates have already formed an opinion of her based solely on where she lives and nothing Madeline does can alter that prejudice: “[Madeline] didn’t know how to make the other children like her, and she felt she constantly had to defend herself from unspoken accusations about a way of life she hadn’t chosen to begin with.”  Pretty weighty stuff, but this is why Polly Horvath is one of my favorite children’s authors.  She never writes down to her audience and presents real-life problems in a way that young readers can easily relate to and connect with.  She also shows us that family is what you make it for the Bunnys, not all that familiar with humans or children, manage to see and appreciate something in Madeline that her own parents have chosen to either overlook or ignore and end up loving her as their own.  Lastly, she shows us the absolute wonder of simply being noticed and appreciated (see previous comment about Madeline’s parents).  Madeline has the unique gift to understand and communicate with animals.  When she mentions this to Prince Charles, he replies, “I’ve often heard animals speak.  Plants too.  It’s all a matter of noticing, isn’t it?  The richness of our lives depends on what we are willing to notice and what we are willing to believe.”  In this world of clatter and clutter and non-stop input, it’s hard to just stop and notice the beauty that surrounds us every day.  It’s quiet and subtle and often goes unnoticed.  But lucky for us, we have a ten-year-old girl, two clever bunnies (with rather smart-looking fedoras), and the heir apparent to the British throne to remind us that it’s there and it’s well worth the effort.