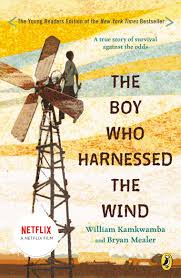 The Boy Who Harnessed the Wind

The machine was ready.  After so many months of preparation, the work was finally complete: The motor and blades were bolted and secured, the chain was taut and heavy with grease, and the tower stood steady on its legs.  The muscles in my back and arms had grown as hard as green fruit from all the pulling and lifting.  And although I’d barely slept the night before, I’d never felt so awake.  My invention was complete.  It appeared exactly as I’d seen it in my dreams.

William Kamkwamba lives in Malawi, a tiny nation in southeastern Africa that is often called “The Warm Heart of Africa.”  He is the only son of Trywell and Agnes Kamkwamba and brother to six sisters.  His family are farmers—like most of the families in the village of Masitala—and grow maize.  It is a hard life, but one filled with love, family, and friends.  But William is naturally curious and innovative and he begins to build things in his spare time.  When famine strikes his village and he is forced to drop out of school for lack of money, he begins to visit the local library where he discovers an amazing thing that would forever change his world and the people around him.  William discovers science.

The story of William Kamkwamba’s determination to bring electricity to his village is a lesson in perseverance, resourcefulness, and faith.  Whether you call it moxie, pluck, spirit, or spunk, William has it and he truly epitomizes the saying, “Where there’s a will, there’s a way.”  Poverty, hunger, and futility are no match for a young boy with a dream of making electricity.  For William knew what building a windmill would mean for himself and his family: “With a windmill, we’d finally release ourselves from the troubles of darkness and hunger.  A windmill meant more than just power.  It was freedom.”

After reading William Kamkwamba’s amazing and inspiring story, two things in particular stuck out.  The first was that after attending and graduating college in the United States and completing an internship with a San Francisco design firm, William chose to return home.  He could have easily found a job and made a respectable amount of money in Silicon Valley or New York, but William followed his heart back to Africa and began using his knowledge and experience to make his community a better place.  Second, even from a young age, William Kamkwamba realized that he was just a small piece in a rather large puzzle.  He knew that we, as humans, were connected and he found comfort and security in that connectedness: “Even though we lived in a small village in Africa, we did many of the same things kids do all over the world; we just used different materials.  After talking with friends I met in America, I know this is true.  Children everywhere have similar ways of playing with one another.  And if you look at it this way, the world isn’t such a big place.”  No, it’s really not such a big place at all, William and thanks to you, it got just a little bit closer.