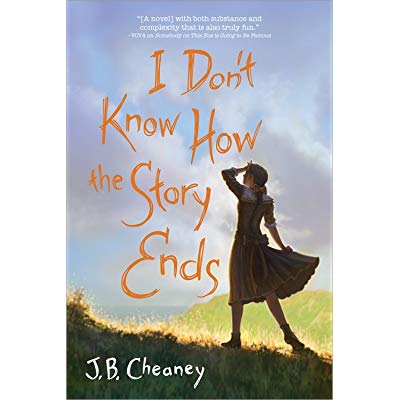 I Don’t Know How the Story Ends

“The first I heard of Mother’s big idea was May 20, 1918, at 4:35 p.m. in the entrance hall of our house on Fifth Street.  That was where my little sister ended up after I pushed her down the stairs.”

Matilda Ransom was tired of the dreariness of Seattle and the restlessness of her daughters and decided that the three of them would spend the summer in California.  Isobel (Izzy) wasn’t too keen on the idea, but between her father being in France serving in the Great War and her constant bickering with her little sister, Sylvie, her mother’s mind was made up.  The family was off to visit Aunt Buzzy in Los Angeles.  Izzy would soon find herself pulled away from the security of her books and thrust into the world of early Hollywood—filled with silent screen stars, bigger-than-life directors, Keystone Cops, a moving panorama, and a headstrong boy determined to make a name for himself in film.  For a girl who loves to tell stories, this summer would undoubtedly provide Izzy with more than enough content.

Historical Fiction is my favorite genre, so when I see an interesting topic written especially for younger readers, I am beyond thrilled.  Being surrounded by everything digital, it was a joy to escape to Hollywood’s earliest years and learn more about the world of the silent screen.  Cheaney introduces her readers to such directorial deity as D. W. Griffith, Mark Sennett, and Cecil B. DeMille, as well as screen legends Charlie Chaplin, Douglas Fairbanks, and Mary Pickford.  Cheaney allows us to be a part of the action by giving us a first-hand look at staging, lighting, makeup, filming, and post-production editing.  We often forget just how skilled and talented these early filmmakers were and I, for one, am grateful to her for reminding us of their groundbreaking brilliance.

In addition to the glamour and glitz of Hollywood, this book also examines the reality of a world at war and the brave men who returned home, but forever left a part of themselves on the battlefield.  During a particularly difficult moment, Izzy’s friend, Sam, once said to her, “Some film can’t be cut” meaning that some things just can’t be fixed and some matters can’t be undone.  While the entire book is informative and entertaining, it is the last few pages that are the most touching, emotional, and poignant.  For the first time, Izzy sees her story told and knows exactly how it ends.  Izzy’s Aunt Buzzy once told her, “Life is like that—the strangest or most unwelcome, even the saddest things that happen can come to make sense in the end.”  Like the movies in early Hollywood, Izzy’s story didn’t need any sound.  All it needed was a picture…a picture of what true love really looked like.

“Remember how small the world was before I came along?  I brought it all to life: I moved the whole world onto a 20-foot screen.”—D. W. Griffith, Director, Writer, Producer.  Thank you for making the world a whole lot bigger Mr. Griffith.