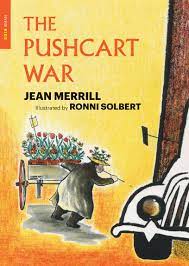 Imagine if Morris the Florist hadn’t been blocking the curb and if Mack hadn’t been in such a hurry to deliver his load of piano stools and if Marvin Seely hadn’t taken a picture with a camera that he had just gotten for his birthday and if Emily Wisser hadn’t cut out that same picture from the newspaper for her scrapbook and if Emily Wisser hadn’t shown that same clipping to her husband, Buddy Wisser, a newspaper editor…well, we might not ever have had the Pushcart War. Now, imagine THAT!

I read The Pushcart War in elementary school, so it had been out for a little over ten years by the time I laid my grubby little hands on it. I’m not sure what drew me to this particular book. Most likely it was the funny little drawing on the cover of a man in a black overcoat wearing a ridiculous flower hat who was right in the middle of shooting a pin at a big truck that caught my eye and imagination (ten-year-olds were much easier to amuse back then!). That book quickly became a long-lost memory until I came across it sitting innocently enough on a library shelf. I pulled it out and there he was! That same funny little man with his ridiculous hat STILL waging war against that massive truck some 40+ years later. After reading it with fresh eyes and a greater understanding of the world, I’m unclear why this book made such an impression on my ten-year-old self, but my much older self is chuckling while shaking my head after realizing that nothing much has changed since its publication.

The Pushcart War is packed with humor, hijinks, and heart. It is the quintessential David-versus-Goliath story of a pack of pushcart vendors who wage war against mighty mammoth trucks in hopes of maintaining their little slice of the free enterprise capitalist pie. Written in 1964, set in 2036, and taking place in 2026 (you got that?), Merrill’s story resonates just as true today as it did in the 60s: demonstrating the virtues and vices of speaking out for what is right; displaying the corruption of those in power who abuse their platform for personal gain by bowing to the desires of special interest groups; illustrating how the media can be a driving force behind shaping public opinion; and proving the unfortunate influence that money ultimately has on morality. Sound familiar? You might think that such weighty topics would never be able to hold the attention of a young reader, but Merrill’s Rube-Goldbergesque approach to storytelling—where one act sets off a series of complex events—keeps readers engaged and enthralled. I mean, who could have imagined that a simple tax on tacks could touch off a possible war with England? Jean Merrill, that’s who. It’s this kind of utterly improbable and highly outrageous scenario that keeps us entertained and cheering for the little guys…no matter how hopeless or hapless their situation may be.

Author Karen Traviss wrote, “I don’t know who the good guys are anymore. But I do know what the enemy is. It’s the compromise of principles. You lose the war when you lose your principles. And the first principle is to look out for your comrades.” Aside from their dried peas and little pea shooters, the people who sold hot dogs or flowers or knick-knacks from their little carts all shared a common purpose: a desire to be seen and to be counted and to be respected. They wanted a place in the world—free from bullying and intimidation and eradication. More than that, they didn’t want someone else to assign them value or worth. The pushcarts knew talking was better than fighting and believed in their cause so much that they were willing to sacrifice themselves for the greater good. They knew that their cause was bigger than just one or two carts and together, they were a force to be reckoned with. Together, they could elicit change. I imagine that the world might be a better place if we just had a few more pushcarts.