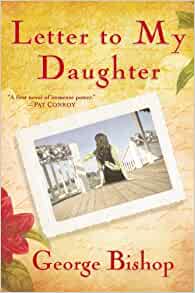 Letter to My Daughter

Arguments. Mothers and daughters have them often, but this argument was different. This one ended with a mother’s slap and a daughter’s angry exodus into the night. As worry and regret floods her brain, Laura sits down in her quiet kitchen and begins writing a letter to her daughter, Elizabeth. A letter that she hopes will give Elizabeth some insight into her upbringing and past in order to help bridge the divide that has grown between the two of them. Simple and honest words on paper that might heal both of their souls and perhaps lead to understanding and forgiveness.
Anyone who automatically dismisses this book because the author is a man will be depriving themselves of a thoughtful, reflective, and meaningful read. I quickly became lost in this story and often found myself thinking it a memoir rather than a work of fiction as the emotional details are strikingly vivid and the writing is genuine and immersive. Although it’s a quick read, it instantly draws you in and will either make you wish that you had received a letter like this from your own parent or that you had taken the time to write a letter like this to your own child.
Through Letter to My Daughter, George Bishop reminds those of us fortunate enough to be a parent, that our children really don’t realize that we had an actual life before their grand entrance into the world. That whenever they utter, “You don’t get it” and “You just don’t understand” that we truly do get it because we also dreamed big dreams and had our heart broken and were disappointed by those people that we thought we could trust. We also laughed and cried and had horrible (and sometimes humorous) lapses in judgement and so yes, we really do understand because at one time, we were just like them—young, overly confident, woefully unprepared, and ready to take on the world…whatever that meant. And while we beat our heads against the wall trying to impart our hard-earned wisdom into their beautifully thick skulls, we find ourselves saying, “You don’t get it” and “You just don’t understand” and then we realize that just like that, the circle is now complete.

Throughout the book, I kept being drawn to the character of Sister Mary Margaret, a kind and compassionate nun who taught at Sacred Heart Academy where Laura was sent. Laura quoted several of her sayings in her letter and every one of them is a gem in its own right: Never be afraid of the truth; Begin at the beginning; Avoid sentimentality at all costs; and my personal favorite, Be good, and if you can’t be good, at least be sensible. With advice like this, maybe Sister Mary Margaret should consider writing a letter, too?

Tiger Ann Parker was six when she realized that her momma wasn’t like other mothers—acting more like a younger sibling than a parent—and her father was no better, often described as “slow” by the men he worked with at the nursery. Tiger hated to admit it, but she felt embarrassed by her parents and often wished that her mother was more like her stylish and independent Aunt Dorie Kay. If she was, then maybe Tiger could make friends with the girls in her class. Maybe Tiger could finally fit in. Tiger’s wish may be coming true when she’s given the chance to leave her small town of Saitter and begin a new life in Baton Rouge. But is starting over really the answer that Tiger is looking for?

This is the second book by Kimberly Willis Holt that I’ve read, the first being When Zachary Beaver Came to Town, and Holt again delighted me with a cast of unforgettable characters and an immersive story. My Louisiana Sky is another period book, but this one takes place during the 1950s when the country was divided by segregation and people with developmental disorders were often institutionalized. Mirroring Zachary, Holt’s down-home and folksy writing is front and center and instantly draws the reader to her characters and pulls you into their quaint and intimate world. The story is told from twelve-year-old Tiger’s point of view and what really compelled me—apart from its strong themes of acceptance and family—was how the script was flipped a bit. Most books that deal with the subject of developmental disabilities for this age often afflicts either a sibling or a friend of the main character. For Holt to strip Tiger’s familial stability by having not one but both of her parents dealing with varying degrees of mental challenges gives the story an entirely unique perspective and instills an overall sense of aloneness for Tiger. Combine that with her having to deal with the common adolescent fare of self-esteem, body issues, and self-confidence and you can’t really fault Tiger for wanting to leave everything she knows and loves behind for a chance to simply be a twelve-year old girl for a while.

There are so many positive lessons to be learned from this book, but the reader who is fighting against circumstances beyond their control and struggling to be accepted by their peers is going to feel the deep connection to Tiger Ann Parker. Most of us can remember wanting to be part of a clique and recalling the sting when confronted with rejection. We feel Tiger’s anguish when she cries out, “It’s not fair. I didn’t do anything to them,” and appreciate the wisdom of Granny’s words when she tells Tiger, “Perhaps those girls don’t deserve your friendship.” It’s true when they say that it’s not what we have in life, but who we have in our life that matters. For Tiger, all she needed was a best friend who loved baseball, a father who had a talent for listening to the earth, and a mother who loved to dance in between the sheets drying on the clothesline under a bright, blue Louisiana sky.

How could Sally Miller possibly imagine how much her life and future would change on a chance encounter in the spring of 1843.  That is what happened when Madame Carl Rouff left her home in Lafayette on that bright morning and travelled across New Orleans to visit her friend in Fauborg Marigny.  On her way, she noticed a woman—a slave—who bore a striking resemblance to her beloved friend, Dorothea Müller.  But no, it couldn’t be for her friend died on board a ship heading to America. No, it wasn’t Dorothea, but perhaps her lost daughter, Salomé?  Could it really be her after twenty-five years without a trace?  Was Salomé Müller, the lost daughter of Daniel and Dorothea, finally found?  And how could a woman of pure German ancestry be a slave?  One chance meeting was about to set off a series of events that would eventually lead Sally Miller all the way to the Supreme Court of Louisiana in one woman’s historic fight for freedom.

In his Author’s Note, John Bailey said that he stumbled upon Sally Miller’s remarkable story while doing research on the laws of American slavery.  The breadth of his research is thorough and extensive and he seems to have included everything he gleaned—the rights of slaves and their descendants, the founding of New Orleans, the plight of redemptioners—in his biography of Sally Miller (waste not, want not).  On the cover of The Lost German Slave Girl is a quote from The Washington Post declaring, “Reads like a legal thriller.”  Not quite.  I would say this book comes closer to an immersive (and at times exhaustive) history of slavery in Old New Orleans in the early 19th century.  The story does pick up at about 100 pages in (the book is 257 pages not counting the Endnotes) and has enough twists and turns to keep the reader’s attention; however, to get to this point in the story requires a healthy amount of tenacity and grit.  Lovers of history and the law will find the abundance of information interesting, but unless you are deeply passionate about either topic, you’ll find the sheer amount of facts and details presented to be a bit to slog through.

Bailey does give readers plenty to think when sharing Sally’s story of freedom, perseverance, and faith.  At this biography’s heart is a seemingly simple question: “What is it that binds one person to another?”  Love?  The law?  A sense of duty?  For Sally Miller, it was perhaps a little of each depending on her current stage of life.  Her story is remarkable, extraordinary, and indeed deserves to be shared if for no other reason than to remind us to never stop fighting for what your heart desires most.