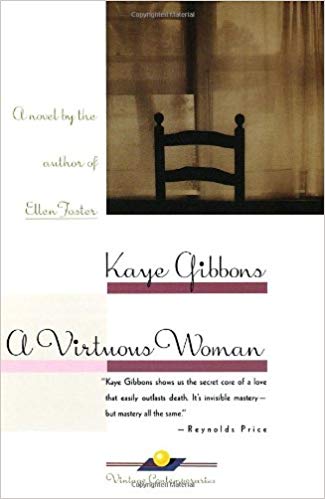 Blinking Jack Ernest Stokes is forty when he marries Ruby Pitt Woodrow.  Jack is twice Ruby’s age, skinny, and homely, but despite his drawbacks, he loves Ruby unconditionally and promises to take care of her.  After suffering a tormented marriage to a brutal drifter, Ruby longs for stability and security and accepts Jack’s proposal of marriage.  Such is the story of two very different people who transcend both economic worth and social status in order to make a marriage work.

Gibbons gives us a simple story about a man and a woman whose devotion for one another is uncomplicated, unwavering, and unbounded.  Jack and Ruby’s love is quiet and kind and both derive a satisfying and greatly needed comfort from their marriage.  A Virtuous Woman is a pleasant read and flows along at a relaxed pace—alternating narration between Jack and Ruby.  Sadly, this book barely breaks the surface and fails to give the reader an opportunity to emotionally bond with either the story or to its characters.  Gibbons succeeds in providing a big-picture view of a bittersweet relationship between two broken people, but the story could have been far richer had Gibbons further fleshed out the complicated feelings and effects associated with infertility, terminal illness, and bereavement.

Jack and Ruby’s unlikely relationship reminds us that love need not be complicated or blind.  Sometimes, just having someone there offering you acceptance, kindness, and peace is enough.