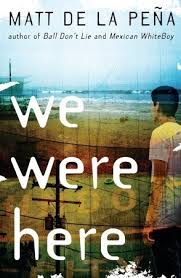 I can sometimes make stuff happen just by thinking about it.  I try not to do it too much because my head mostly gets stuck on bad stuff, but this time something good actually happened: the judge only gave me a year in a group home.  Said I had to write in a journal so some counselor could try to figure out how I think.  Dude didn’t know I was probably gonna write a book anyways.  Or that it’s hard as hell bein’ at home these days, after what happened.  So when he gave out my sentence it was almost like he didn’t give me a sentence at all.

Miguel Castañeda had a plan for getting through his one-year sentence in a group home: write in his journal, keep to himself, pretend to call his mom every Sunday, and read every book on the home’s bookshelves.  Just be a ghost—invisible and non-existent.  That plan was changed when he was assigned to share his room with Rondell, a big black kid that was once his cellmate in Juvi.  And then there was Mong, a skinny, tough, and silent Chinese dude with scars on his cheeks and a psycho smile.  Suddenly a year seemed a whole lot longer.  And then one night, Mong asked Miguel to escape with him to Mexico.  Maybe a new start away from California is just what he needed.  Maybe it’s the clean start he so wanted.

We Were Here was one of those books that I kept checking out and returning—always meaning to read it but getting distracted by something else.  Shame on me for not giving de la Peña’s work the attention it deserved.  We Were Here is gritty, raw, candid, bleak, and insightful.  It’s also a stark reminder to never judge a book by its cover.  The author introduces us to kids like Miguel, Mong, Rondell, and others who have found themselves on the wrong side of the law for one reason or another.  Each has their own story and shows us how one wrong decision or personal tragedy can set off a series of events that ultimately lands them in a group home, juvenile detention, or jail.  We get to meet these kids and understand that many are more than the sum of their parts and just need what Miguel so urgently desires—a second chance.

We Were Here is filled with heart, honesty, and hope.  The characters are realistically portrayed and de la Peña avoids simply making them ethnic caricatures by giving them depth, warmth, a deep vulnerability, and an underlying desire to make honorable and decent choices.  Narrated by Miguel through a series of personal journal entries, this story demonstrates just how far the bands of friendship can be stretched without breaking and the value of choosing loyalty over personal desire.

Matt de la Peña opened his book with an excerpt from Denis Johnson’s “From a Berkeley Notebook” and I thought it would be an appropriate way to close this review.  It beautifully depicts Miguel’s personal transformation and how events in our own lives can make each of us strangers to ourselves:  “One changes so much/ from moment to moment/ that when one hugs/ oneself against the chill/ air at the inception of spring, at night,/ knees drawn to chin,/ he finds himself in the arms/ of a total stranger,/ the arms of one he might move/ away from on the dark playground.”