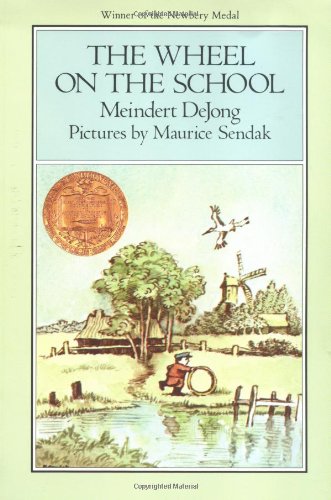 The Wheel on the School

Welcome to Shora, a fishing village in Holland on the shore of the North Sea in Friesland.  Shora has some houses, a church, a clock tower, and a school, but it is the school children that makes this town—this story—so special.  Of these six school children, there is only one girl and her name is Lina.  One day, in the middle of arithmetic, Lina asks a question that will set in motion a series of events that will change their little village forever: “Teacher, may I read a little story about storks?”  You see, no one can remember a time when there were storks in Shora and Lina’s essay made everyone begin to wonder and ask why this was so.  So begins the story of Jella, Eelka, Auka, twins Pier and Dirk, and Lina who share a common dream of bringing the storks back to Shora.  But for now, that dream would have to wait…at least until after arithmetic.

Every now and then, a book comes along that reminds you why you fell in love with reading.  Meindert DeJong’s story about a small Dutch village is such a book.  It’s a charming and enchanting story about how a single dream ignited the imagination and united a village.  DeJong brings the reclusive, the misunderstood, and the outsider together to show that each has importance and value.  His message of inclusion and acceptance is delivered warmly and lovingly and gives readers a sense of hope and faith and the promise that perhaps dreams really can come true.

The Wheel on the School is a brilliant gem that shows us how a legless man could still walk tall among his fellow fishermen, how a heavyset and slow boy could become a hero, how a lonely grandmother could become a friend, and how a girl could be just as strong and brave as the boys.  Mostly, this story reminds us that even in the midst of the impossible, lies the possible.