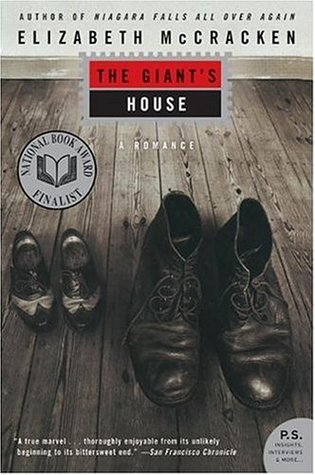 “Peggy Cort is crazy, anyone will tell you so.  The only person who ever thought I wasn’t is dead; he is the subject of this memoir.”

Peggy Cort is a librarian in Brewsterville, an unremarkable little town in Cape Cod that has a few guest houses and a small stretch of beach.  But at one time, Brewsterville had James Carlson Sweatt.  Everyone knew him as “The Giant”.  It was the fall of 1950 when Peggy first met James.  He walked into her library looking for a book on magic.  At that time, he was 11-years old to her 25 and had already reached a height of six foot two.  Little did Peggy realize then how much that one ordinary moment would change her life forever.  How, as James Carlson Sweatt grew, so would her feelings for this humble, kind, and gentle giant.

The Giant’s House is Elizabeth McCracken’s first novel and it’s easy to see why it became a National Book Award finalist.  McCracken gives us an exceptionally well-written and heartbreakingly beautiful story of two souls who share a quiet and understated love.  James and Peggy form a mutually beneficial yet emotionally satisfying relationship based on their circumstances: he—by genetics—requires daily support and assistance while she—through vocation—is more than able to adequately provide both.  On the cover, The Giant’s House is rightly billed as a “romance” rather than a love story since the author mainly focuses on the growing relationship between James and Peggy.  It truly is an immersive story filled with compassion and tenderness.  I withheld a rating only because the ending didn’t seem to fully hit the mark.  McCracken’s story seemed to veer a bit off-course near the end and this shift was just enough to leave me a bit unsettled and unsatisfied.

When Peggy once used the word desiderata, James asked her its meaning to which she replied, “That word, it’s the best thing I learned in library school.  It means—well, it’s sort of like, what’s desired and required.”  “Desired and required?  Which?” James asked.  “Both.  Some things are both,” she said.  Dictionary.com gives an example of this word by providing “happily-ever-after”.  While The Giant’s House may have fallen short in providing readers with a traditional happily ever after, it does give us two characters who succeed in making each other happy until their own ever after arrives.  And that is enough to satisfy my own desideratum.