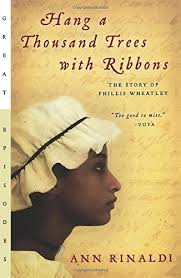 Hang a Thousand Trees with Ribbons: The Story of Phillis Wheatley

It was May 1772 and Phillis Wheatley was going to Province House in Boston to prove that she—and she alone—authored the poetry that had caught the attention of so many.  Soon this 17-year-old slave would be standing in front of merchants, clergy, councilmen, the lieutenant governor and governor, and John Hancock to prove the authenticity of her work.  It wouldn’t be easy, for who could have imagined that an uneducated African girl could not only read and write, but produce such astonishing work.  But before Phillis Wheatley came to this critical juncture in her life, her journey would start ten years ago in Senegal, West Africa where a disgruntled uncle would sell her for brandy, some cowrie shells, and muskets.

With just a few minor exceptions, Ann Rinaldi gives readers an historically accurate account of Phillis Wheatley’s remarkable journey from slavery to becoming America’s first published black poet.  This young girl, who was sold into slavery at the age of seven and named after the very ship that carried her to America, would grow up to meet such dignitaries as John Hancock, Benjamin Franklin, and George Washington.  Rinaldi takes us to Boston where we relive the Smallpox Epidemic of 1764, the Quartering Act, the Sugar and Stamp Acts, the Boston Massacre, the Boston Tea Party and the retaliatory Boston Port Act of 1774, and the Suffolk Resolves.  It’s a delight for history enthusiasts and an unbelievable story for readers of all ages.

Up until the time of its publication in 1996, Hang a Thousand Trees with Ribbons was the first “humanistic” story written about Phillis Wheatley.  As Rinaldi explains in her Author’s Note, “All the books written about [Phillis Wheatley] at present are scholarly, concerned with the dry facts of her life or her classical poetry.”  When Rinaldi told her friend, an African American librarian, that she was writing a book that would “put flesh” onto Phillis Wheatley, her friend’s response was, “It’s about time.”  Indeed, it was.

Phillis Wheatley’s story is heartbreaking and tragic.  Despite her literary gifts and talent, she died in poverty and obscurity.  Although she was granted freedom by her master, she was never able to rise above the limitations she faced due to the color of her skin.  Although these are Rinaldi’s words and not Phillis’s, one can imagine the poet saying something similar: “…I love that when I write I am not skinny and black and a slave.  My writing has no color.  It has no skin at all, truth to tell.”  Phillis Wheatley’s poems may not have had skin, but they were brimming with heart and soul and hope.  “I could scarce contain my own excitement,” Rinaldi’s Phillis said.  “The more I wrote, the more excited I became.  I felt like Columbus must have felt when he just discovered America.  Only the land that I had sighted was myself.  In a way, my own way, I was free.”

It’s Tween and Teen Tuesday where we review either a juvenile (J) or young adult (YA) book. 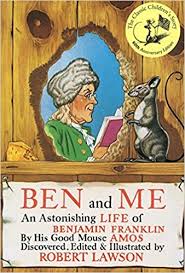 Do you recall seeing portraits of Benjamin Franklin where he wore an old fur hat?  Little did you know that inside that hat lived one very intelligent, outspoken, and opinionated mouse by the name of Amos.  Amos was Franklin’s closest friend, adviser, and the one largely responsible for Franklin’s greatest innovations and achievements…regardless of what historians may have recorded.

Lawson writes with wit and charm and provides readers with whimsical drawings that give life to both Ben and Amos.  From lightning rods to “Liberty Forever!”, young readers will get a glimpse into the greatness and brilliance of one of history’s most accomplished individuals.  Of course, we need to temporarily overlook the flamboyant embellishments of one overly enthusiastic rodent, but when you do, you get a delightful story that is just the right length to hold a young reader’s attention while capturing the imagination.  Throw in a revolution…or two…and you have a tale that is sure to delight and amuse.