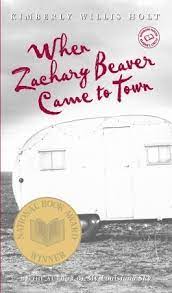 When Zachary Beaver Came to Town

Nothing ever happens in Antler, Texas. Nothing much at all. Until this afternoon, when an old blue Thunderbird pulls a trailer decorated with Christmas lights into the Dairy Maid parking lot. The red words painted on the trailer cause quite a buzz around town, and before an hour is up, half of Antler is standing in line with two dollars clutched in hand to see the fattest boy in the world.

It’s the summer of ‘71 in Antler, Texas and the biggest news in town was Cal’s brother, Wayne, serving in Vietnam and Toby’s mom, Opalina, going to Nashville to compete in the National Amateurs’ Country Music Competition at the Grand Ole Opry. Those two things alone were enough to keep the town’s tongues wagging for a while, but then along came that white trailer carrying the world’s fattest boy. Just two dollars and you could gawk all you like. It doesn’t seem like anything could top this, but Toby Wilson and Cal McKnight are two teenagers in a small town so you can bet that adventure—and trouble—aren’t too far behind.

With her National Book Award winning novel, Kimberly Willis Holt takes us to small town America in the early 70s. A time when the country was embroiled in the Vietnam War, the local cafe was where you went to get updated on all the latest news, and there was nothing so bad that eating a snow cone with your best friend couldn’t make right. Holt’s downhome, folksy writing immediately sets a tone of comfort, familiarity, and inclusion for her readers and instantly makes you a part of this tight-knit town that boasts the Wag-a-Bag, Bowl-a-Rama, AND Wylie Womack’s snow cone cart. What more could a town need?

Holt explores so many important and relevant themes that often (and unfortunately) go unexplored in today’s stories for young readers. It’s the subtle niceties that bear no monetary value that seldom makes it to the written page: allowing a person to maintain their dignity, extending a stranger common courtesy and respect, and accepting loss and defeat with grace and valor. Kindness, decency, and friendship serve as the foundation for When Zachary Beaver Came to Town, but Holt also shines a light on the selfish side of human nature and how easy it is to put our own wants and desires ahead of what is right—regardless of the consequences. She also explores a number of relationships in her book with each one offering readers a valuable lesson in forgiveness, humility, and empathy.

Two teenage boys learned so much when Zachary Beaver came to town, but perhaps the most important were that friends don’t snitch on one another, you always stick up for those who can’t defend themselves, and you never, never turn down the chance to dance with the girl of your dreams…especially when a song by the Carpenters is playing.