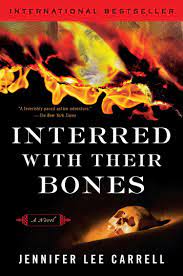 Interred with Their Bones

There are many who regard William Shakespeare, often called the “Bard of Avon” or simply “the Bard”, as the greatest writer in the English language. There are others, however, who believe that Shakespeare’s works are not his, but were written by another writer—or perhaps a group of writers. These two schools of thought belonged to Stratfordians who recognized Shakespeare as the true author of his works and Oxfordians who believed the rightful author to be Edward de Vere. While history may look upon this as mere conspiracy theory, others loyal to Shakespeare are willing to die—even kill—to keep the truth from ever surfacing. No one knows this better than Kate Stanley, Shakespeare scholar and theater director who finds herself thrown into a complex and dangerous mystery after her mentor leaves her with a box and a warning: “If you open it, you must follow where it leads.” Where it leads is a journey tangled with secrets, lies, danger, and death, but Kate must rely on her wits and her knowledge of the Bard to help her navigate the clues and to stay alive.

Like most, I am aware of William Shakespeare and I’ve read many of the Bard’s works—sadly, all while I was in either high school or college. Although I appreciate his work, I never fully reached “fan” status and so it was difficult to totally immerse myself in this book. However, I was unaware of the controversy surrounding Shakespeare’s credibility and so I found this topic to be extremely compelling and thought provoking (I may never look at the man born in Stratford-upon-Avon in the same way again). Shakespeare and Hamlet devotees will appreciate the numerous references made to the tragic play about power and revenge while those of us on the respectful fringe might find that parts of the story seem to languish at times under the burden of historical facts and literary details. Also, readers are taken on an exhaustive trek from Europe to America and back again with many stops in between. It’s a lot to take in, but the story’s momentum quickly gains steam and reaches a heart-racing pace near the end. That and several twists and turns will ensure that your tenacity is well rewarded.

As the story’s protagonist, I liked Kate Stanley and will probably read Carrell’s sequel Haunt Me Still which focuses on Shakespeare’s Macbeth. However, I did find it somewhat irritating that whenever Kate found herself in a potentially dangerous and unfamiliar situation, her first instinct was to let anyone and everyone know her exact location by saying, “Is anyone there?” Several times I found myself shushing her from the safety and security of my living room couch. Aside from this and a few other questionable choices, I gave Kate props for her intellect, loyalty, and all-around mettle. She’d make a fine Shakespearean heroine. Her mistakes and miscalculations only reinforce her humanness and vulnerability and make her a believable, relatable, and likeable character.

I think the one thing that Carrell points out in the book that is worthy of highlighting—and perhaps remembering—is that you should never judge a book by its cover. This may seem an oversimplification of what Carrell is conveying with her novel, but this is the main crux behind Shakespeare’s detractors: how can a simple man who came from nowhere and had nothing author some of the world’s greatest plays and sonnets? But it was the story’s Sir Henry Lee, a legend of the British stage, who reminded Kate of the unpredictable and serendipitous nature of greatness: “Like your Abraham Lincoln in his log cabin, the Stratford boy’s story illustrates a point that matters a great deal: Genius can strike anywhere. Anyone can be great.” So, whether you’re a Stratfordian, an Oxfordian, or just a lover of suspense novels, I think we can all come together and agree on that.