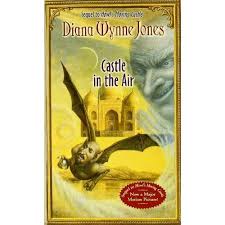 Castle in the Air

Abdullah was a young carpet merchant who lived in the city of Zanzib.  It was clear that he had always been a disappointment to his father for upon his passing, all he left Abdullah was just enough money to buy and stock a modest booth in the northwest corner of the Bazaar.  Despite this, Abdullah knew he was destined for greater things.  In his daydreams, he was actually the kidnapped son of a mighty prince who must now live a life filled with heat, haggling, and the smell of fried squid.  But soon came the day when a man entered Abdullah’s booth.  A rude, imperious stranger bearing a worn out carpet that he wished to sell.  A carpet that was magical.  Could this carpet be the key to what his prophecy foretold upon his birth: “…he will be raised above all others in this land.”?  With a flying carpet in hand, Abdullah would soon find himself encountering an evil djinn, a bottled genie, an enchanted cat, and the beautiful girl of his dreams.

Castle in the Air is the second book in Diana Wynne Jones’s Howl’s Castle series.  Like its predecessor, this book is filled with wit, charm, action, adventure, and a lot of heart.  It’s the stuff that fairy tales are made of: a conniving stepmother, evil beasts, magical objects, princesses, curses, and large doses of bravery, kindness, loyalty, and love.  One thing that I appreciate about Jones is that she makes both her male and female protagonists equally strong, clever, and resourceful.  She resists the urge to diminish one character in order to elevate his or her counterpart and even writes that Abdullah’s love for his princess was strengthened by these admirable qualities: “Here Abdullah was somewhat amazed to discover that he, really and truly, did love Flower-in-the-Night just as ardently as he had been telling himself he did—or more, because he now saw he respected her. He knew he would die without her.”

The first two-thirds of the book could very well have been a standalone story since only minor references to Howl’s Moving Castle were made.  However, once you just about hit the 200-page mark, that’s when things really pick up and several characters that readers fell in love with in the first book begin to make their appearances.  It’s not a showstopper if Castle in the Air is your first introduction to Jones’s wonderful flying castle trilogy, but you are lacking a bit of backstory that deepens the journey and makes reconnecting with these characters a nice reunion.

Even though this series is targeted to young adult readers, it would be an engaging and delightful read for children grades five and up.  With strong females and morally-centered males, Jones gives us a nice alternative to darker fantasy books that tend to monopolize library and bookstore shelves.   With good triumphing in the end, bad getting its comeuppance after learning a valuable lesson, and a happy ending never far from sight, Castle in the Air reminds us that you cannot cheat Fate, to be very careful what you wish for, and that a little bit of kindness can go a very long way.