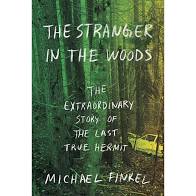 The Stranger in the Woods: The Extraordinary Story of the Last True Hermit

There are three general groups that hermits can be divided into to explain why they seek isolation: protesters (those who detest what the world has become), pilgrims (often referred to as religious hermits), and pursuers (those seeking alone time for artistic reasons, scientific insight, or self-understanding).  Twenty-year-old Christopher Knight didn’t fit into any of these categories.  In 1986, for reasons unknown, he simply turned his back on the world and disappeared into the Maine woods for twenty-seven years—nearly 10,000 days.  By all accounts, Chris Knight was the most solitary-known person in all of human history and journalist Michael Finkel was about to share his unimaginable story with the world.

According to John Donne, “No man is an island, entire of itself; every man is a piece of the continent.”  The same held true for Chris Knight.  He sought detachment, but needed essentials to survive and those essentials belonged to other people.  He was an island desperately needing food, clothing, and materials to ensure his survival in the harshest of elements and so Knight resorted to stealing from his fellow man.  To avoid detection for so long, he adhered to a strict set of rules: strike only after midnight, travel from rock to root or on ice to avoid leaving footprints, don’t steal from permanent residents, and take only pre-packaged or canned goods to avoid possible poisoning.  Aside from thievery, Knight held himself to a strict moral code and avoided personal contact at all costs.  But in life, nothing is certain except change and death and Knight’s idyllic world would soon come to a close without either incident or fanfare.

Because Knight kept no written account of his life, Michael Finkel’s The Stranger in the Woods is an extensive compilation of conversations with Knight (nine one-hour sessions over the course of two months); insights from psychologists, neuroscientists, and experts on autism; books on isolation, hermits, and solitude; and interviews with Knight’s family, neighbors, victims, and local law enforcement.  It is an exhaustive, profound, and gripping account of one man’s desire to be alone, yet was never lonely.  A man whose defiance to live according to societal norms brought him admiration from survivalists, condemnation from the violated, and contempt from the hermit community.  It’s ironic that a man determined to walk invisibly for so many years managed to leave such a large imprint on so many when all was said and done.

History views banishment, solitary confinement, and marooning as the most severe forms of punishment.  For Chris Knight, he not only sought these conditions, he thrived in them.  Henry David Thoreau wrote, “I love to be alone. I never found the companion that was so companionable as solitude.” In his twenty-seven years alone in the Maine wilderness, Chris Knight managed to say only one audible word.  Looking back now, I’m sure he feels that that single word was one word too many.