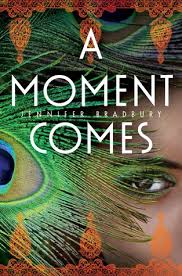 “Safe.  I think about the word as we continue walking.  What does safe mean anymore?  I wonder if I’ll ever feel safe again.  I wandered these markets and streets freely just a few years ago.  And then I grew up.”

Tariq is Muslim born and raised in India.  He is eighteen and aspires to study at Oxford.  It is what Daadaa—his grandfather—dreamed for him and he will do anything to make it a reality.  Anupreet is Sikh and nearly sixteen years old.  She’s beautiful despite the scar that runs from her eye to her cheek.  It’s healing, but will always be there, just like the memory of that horrible day when she acquired it.  Margaret is sixteen and from London.  Her father was sent to Jalandhar to work for the boundary award.  His job is to help break India into pieces so that Muslims can have their own separate state.  She knows why her mother made her come here…to restore her virtue, make her “respectable” again.  Although she’s not sure how this hot, sticky, and loud place will be able to accomplish that.  It’s June 1947 and the worlds of these three teenagers are about to come together and their journey will take them to what history would later refer to as the Partition of India of 1947.

Books, like Bradbury’s, that are based on actual world history play such an important part in the lives of our younger population.  Historical Fiction is not only a way to educate, but to offer an all-important perspective.  In A Moment Comes, we are given three very different yet relatable young adults: each offering his or her own point of view about what is happening to them, their family, and the world around them.  Bradbury largely avoids stereotypes and instead offers up an honest landscape about a country being torn apart from the inside.

The Partition of India of 1947 began after the Second World War.  Lacking the sufficient resources to control its greatest asset, Britain exited India after three hundred years of British rule and partitioned the country into two independent nation states: India (with its Hindu majority) and Pakistan (with their Muslim majority).  It marked one of the greatest migrations in human history and resulted in more than fifteen million people losing their homes and between one to two million people losing their lives.  Bradbury is exceptionally careful not to choose sides and paint one party as “good” or another as “bad”.  Instead, she lays out three lives told through three alternating points of view and allows the reader to form his or her own judgments and opinions.  The story is fast-paced, harrowing, poignant, and bitter.  But in the end, Bradbury offers up some much-needed hope.  It’s faint and so very uncertain, but she places it there nonetheless so that we—along with Tariq, Anupreet, and Margaret—can grab it and hold onto it as tight as we can.

A Moment Comes reminds us that history is more than just words on a page.  Rather, it’s people who breathe, dream, hope, bleed, and die.  People who have risen above their own limitations in order to do something remarkable or historic or even heroic.  And just like history is more than just printed words, maps are more than just lines.  They are traditions and cultures and religions.  Bradbury summed this up perfectly through Margaret when she said, “Lines are funny things. They make us feel safe—at least for a while—knowing where we end and something or someone else begins.  But they can also make us want, can make us bitter, wanting what lies on the other side of the line.  But whether it’s a border on a map or a boundary between two people, the lines are still only lines.  Still something someone made up, decided on.  They’re not even real, but so long as everyone agrees to play along, they work fine.  But how can lines of a map tell a piece of land what to be any more than lines between one person and another can pretend to be what makes them different?”  In the end, Tariq, Anupreet, and Margaret were all able to let go of their own prejudices and realize that they themselves aren’t so very different from one another…regardless of what the lines might say.