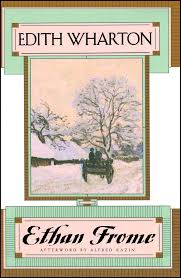 It was a long time since any one had spoken to him as kindly as Mrs. Hale.  Most people were either indifferent to his troubles, or disposed to think it natural that a young fellow of his age should have carried without repining the burden of three crippled lives.  But Mrs. Hale had said, “You’ve had an awful mean time, Ethan Frome,” and he felt less alone with his misery.

Ethan Frome’s daily existence is just as cold, bleak, and barren as the winters in his Starkfield, MA hometown.  His farm is in neglect, his mill is in decline, and whatever money he has left goes to the care and treatment of his ever sickly, spiteful, and sour wife, Zeena.  The only bright spot is Mattie Silver, Zeena’s cousin who comes to the farm to act as housekeeper and caregiver.  Though highly moral and virtuous, Ethan can’t deny the forbidden feelings he has for Mattie and can’t help imagining an alternate life where the two of them might be together and happy.

Edith Wharton was the first woman to win a Pulitzer Prize and it’s no surprise why after reading Ethan Frome.  Only an author as skilled as Wharton can make bleakness so beautiful and tragedy so fascinating.  Here’s how she describes Mrs. Ned Hale, the daughter of the village lawyer: “It was not that Mrs. Ned Hale felt, or affected, any social superiority to the people about her; it was only that the accident of a finer sensibility and a little more education had put just enough distance between herself and her neighbors to enable her to judge them with detachment.”  What a delicious way of saying that Mrs. Ned Hale was nothing but an uppity and moralistic snob…although to her credit, she is quite fond of our Mr. Frome and sympathetic to his unfortunate circumstances.

In anyone else’s hands, Ethan Frome would be a very dark, depressing, and dispirited story, which it undoubtedly is.  However, Wharton presents readers with a thoughtful and illustrative commentary on morality, responsibility, and the burdens that come with decency, loyalty, and honor.  I was quite surprised to find that Ethan Frome was made into a movie in 1993 (starring Liam Neeson, Patricia Arquette, and Joan Allen).  My first and only reaction to this discovery was, “Why?”  Once you’ve read Wharton’s 1911 novella, you know that translating her words to film is not going to have the same impact and would only spell doom (and Roger Ebert agreed).  One reviewer of the book likened Ethan Frome to Romeo and Juliet, but if Wharton were to hear this comparison, I would imagine her reply being something like, “Oh, if Ethan and Mattie should only be so lucky.”  Frome’s story is pathetic, cruel, sad, and hopeless and we love him all the more for it.

I put off reading Ethan Frome for a while as I had always imagined it to be a daunting and challenging read, but it was actually quite engaging and immersive, and I never felt overwhelmed by its imagery or subject matter.  It’s truly deserving of the term “classic” and although I didn’t form a connection with this particular work (which is why I rated it a four versus five), it has given me the confidence to seek out other works by Wharton, which I will do without fear of consequence.  If only Ethan Frome was capable of doing the same.