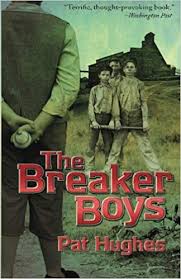 Nate Tanner was born into privilege.  For several generations, his family has owned coal mines near Hazelton, Pennsylvania allowing Nate to have anything he desired: the best education, the finest clothes, and a bevy of servants to see to his every need.  What Nate didn’t have was a single friend.  Perhaps it was because of his temper or that he was spoiled or that he was always getting into trouble.  Maybe it was all three.  Like his teacher said, when you had so much, what was left to try for?  But then he met Johnny Bartelak, a Polish American boy who sorts coal in one of his family’s breakers.  Theirs was a friendship that started with a simple bike ride, but would slowly be built with lie upon lie.  How could Nate tell Johnny the truth about his family and how could he possibly tell his family about Johnny?  As the miners begin to talk of joining a labor union, Nate must make the ultimate choice between friendship and family.

The Breaker Boys is based on actual events that occurred on September 10, 1897 at the Lattimer mine near Hazelton, Pennsylvania.  Known as the Lattimer Massacre, nineteen striking immigrant coal miners were killed and thirty-nine others were wounded.  The miners were mostly of Polish, Slovak, Lithuanian, and German ethnicity and author Pat Hughes brings their story and struggles to life in this thoughtful and moving story about friendship, honor, forgiveness, and betrayal.  Although Hughes fills her novel with plenty of conflicts—rich versus poor, father versus son, labor versus management, immigrant versus native—the story never feels bogged down or overly preachy and the action and emotions slowly intensify as Nate’s secret becomes closer and closer to being discovered.

Hughes also takes her time in allowing the reader to get to know Nate Tanner—a spoiled, self-indulgent, self-centered, rude, and disrespectful twelve-year-old boy whose mother died while he was quite young and who has still not forgiven his father for marrying the family’s governess.  To her credit, Hughes made Nate very human and avoided giving him an Ebenezer Scrooge or Grinch moment where he sees the error of his ways and experiences a complete moral transformation.  Nate is, after all, a young boy with a lot of growing up to do and so we continue to see moments of selfishness, arrogance, and stubbornness throughout the book, which makes his character all the more relatable and sympathetic.

The Breaker Boys is gripping and insightful and offers readers a glimpse into American history while illustrating the importance of honesty, the value of friendship, and the gift of second chances.  American educator, author, and businessman Stephen Covey said, “Strength lies in differences, not in similarities” and Pat Hughes shows us that despite differences in class, ethnicity, and religion, two young boys found strength and friendship through something as simple as a bike ride.