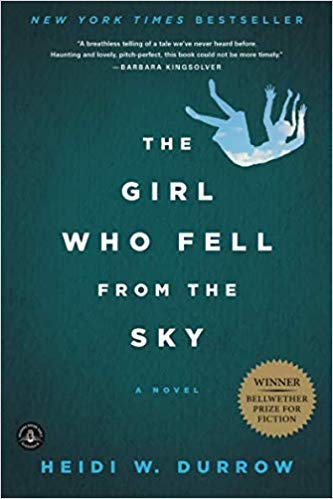 The Girl Who Fell from the Sky

Rachel Morse is eleven years old and living with her paternal grandmother in Portland, Oregon.  Born to a Danish mother and an African-American GI father, she finds herself caught between two very different worlds and struggles to find a place somewhere in the middle.  However, it is the early 1980s and Rachel is often forced to choose between black and white: “I see people two different ways now: people who look like me and people who don’t look like me.”  She builds her world around “last-time things” (like speaking Danish or saying Mor, which means mother) and “first-time things” (like feeling shame or excluded) and lives each day storing her anger and hurt inside an imaginary bottle.  Fighting against a tragic past and facing an uncertain future, will Rachel have to give up one part of herself in order to embrace the other?

Durrow gives us a haunting and heartbreaking coming-of-age story about a biracial girl desperately trying to find her place in the world.  Like Rachel, Durrow’s mother was Danish, her father was a black serviceman, and she possesses a set of piercing-blue eyes.  We can see what Durrow must have dealt with as we see Rachel longing to fit in and be accepted.  Rachel’s backstory is tragic and unimaginable and one can only imagine the inner strength our young heroine possesses in order to avoid a fate like her mother’s.  The beginning of the book is a little confusing as Durrow floods the reader with several characters in various situations across different points in time.  The storyline eventually smooths out, but then you begin to understand the meaning behind the title.  This launches the story in an unpredictable direction and the pace never slows from there.

Perhaps the most distressing storyline belongs to Nella, Rachel’s mother.  A Danish immigrant, she is unused to the treatment her biracial children face in America (her marriage was generally accepted in Europe).  As a mother, she loves her children unconditionally and vows to protect them at all costs.  She is broken by the injustices thrown at her children and wonders why people are unable to see her children as she does: “My children are one half of black.  They are also one half of me.  I want them to be anything.  They are not just a color that people see.”

The Girl Who Fell from the Sky is haunting and harrowing.  It is not one of those feel-good books that is wrapped up in a pretty bow.  Instead, we are given a story that is raw and poignant and uncomfortably ugly but honest.  Under anyone else’s pen, the reader might be left with a sense of hopelessness, but Durrow is, in a sense, telling us her own story which, at its very core, is a story of survival.  A story where a girl refuses to be boiled down to simply this or that.  She is more than just the sum of her parts and her acceptance of this is enough to give us a relatively satisfying ending.  As Rachel says, “I’m not the new girl.  I’m not the color of my skin.  I’m a story.  One with a past and a future unwritten.”  And with that, the girl who fell from the sky realized that she had wings and could fly.

2 thoughts on “The Girl Who Fell from the Sky by Heidi W. Durrow”