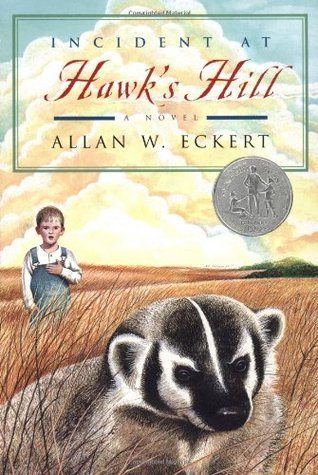 Twenty miles north of Winnipeg, in the year 1870, there stood the farm of William MacDonald, his wife, Esther, and their four children.  They named their farm Hawk’s Hill and for many years, the family thrived on the land.  Everyone thrived except the youngest child, Ben.  At six years old, he was much smaller than other children his own age.  He was also quiet, withdrawn, and seemed to get along better with the surrounding animals than with his own family.  Ben would often imitate the animals he came in contact with—mimicking their sounds and movements.  The folks in town called him strange, odd, and different.  But Ben derived a certain amount of comfort when he was with the animals, and in turn, the animals drew comfort from him.  One day, Ben wandered a bit too far from home and found himself hopelessly lost.  Little did he realize that his rescuer would be a female badger who needed him almost as much as he needed her.

The author’s note states that this book “is a slightly fictionalized version of an incident which actually occurred at the time and place noted.”  Intrigued, I did a little research and found that this claim could neither be substantiated nor does the author provide any further documentation.  Some believe Eckert’s story is based on legend while others think that it came from an article about a boy who, in 1873, lived in a badger hole for 10 days.  Regardless, Eckert gives us an interesting main character who is part Dr. Dolittle and part John Audubon and, through his exploits in and around his farm, offers readers a fascinating insight into the natural world.  Eckert also provides a greater understanding of the hunting, nesting, and breeding habits of the badger sow.  Although the book is filled with many interesting facts and details, the pace doesn’t lag and the story never feels weighted down.

Through the unimaginable and unlikely bond formed between a boy and a badger, we are treated to a story of survival, friendship, and devotion.  I truly enjoyed this book, but deducted a rating point since this is one of those rare children’s books that lacks a sufficient ending.  Because of the emotional commitment required on the reader’s part, the author should have provided a definitive ending merely out of a sense of obligation…especially given the age of the intended audience.  But rather than acquiring a sense of closure, we are left feeling deserted, confused, and rather perturbed.  There are stories that purposely leave the ending open-ended in order to encourage further thought and reflection.  This is not one of those stories and will undoubtedly leave the reader growling, chittering, wailing, hissing, and sounding very much like an angry badger.